Invite A Friend To Check Us Out!

Everyone did an amazing job with the “Double Trouble” WOD today. I thought it fitting for our, “turn a weakness into a strength,” theme this week. Also welcome to Melanie our newest member who literally jumped right into crossfit this morning with us at 6am.
You are all quickly discovering that CrossFit will expose and eliminate areas you were at one time deficient in. We aren’t likely to see someone who follows our programming have some of the weaknesses that you are sure to see at the average “health” club. You know, the over developed pecs and biceps coupled with a weak back and chicken legs. This is because movements like the squat and dead lift, essential parts of building real fitness, are completely ignored in the average gym goers programming.
This is not and will never be the case here at CrossFit Cape Cod. We don’t make body composition our primary concern- we don’t have to, it takes care of itself when our focus is better performance and sustained power output. When you become stronger, faster, increase, endurance, perform movements that require power, accuracy, balance, agility, flexibility, coordination and all the components of fitness- your ‘body composition’ reflects that. On the other hand, as we probably all know- when your “fitness” is driven by a number on the scale or guilt, or fear that you will be fat or unattractive, it just wont work! We do what works!

Good job on Fran today- and welcome to our newest member Al! You did an outstanding job on a very challenging workout.

The double under gives everyone trouble at first- so how do you get better? This should help:

Welcome to the new members from this weekend Heather,Paul,Jeff,Nicki and your kids. You all had great first time performances!

We are having a lot of fun at CrossFit Cape Cod and people are already seeing great result just 2 weeks into it. Saturdays Fight gone bad was a great workout and we saw some incredible effort! Also, we can look forward to some more equipment this week!

Fran is one of the most frequently mentioned workouts amongst crossfitters. I would love to hear your experience from your first Fran today posted in the comments!

Everyone comments on how nice Jane is. It has been astonishing to see her these past 2 and a half weeks go from someone who struggled with the air squat to having a solid 155lb back squat(!) and an incredible 225lb dead lift! You are doing great Jane and you’re a pleasure to have at C3. 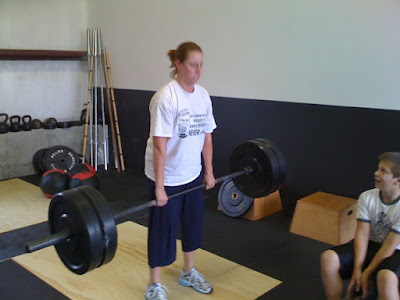 You know you have a potential firebreather on your hands when you combine someone who pushes as hard as he possibly can on Met-Con days and had almost 800lbs for his first shot at the total. It is going to be awesome to watch Jared progress over the coming months. 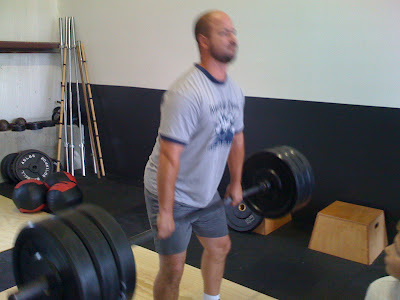 A success story in progress Rita jumped on that box a dozen times after doing the Caleb WOD. You never cease to amaze us- Keep up the awesome work. By the way what happened to that lady with breathing difficulties,who had to step up onto the 12″ box. She looked like you only 6+ lbs. heavier;-) Keep going Rita we love ya! 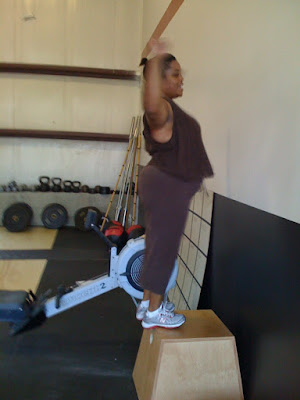 Sibling rivalry- both surprised themselves with more than 100 consecutive full ROM sit-ups! 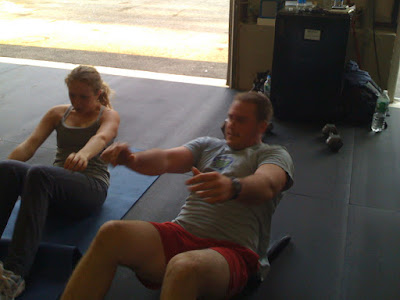 Jared watches Ethan cruise through 200 sit-ups. Each one was full ROM! So many people wish they had found crossfit when they were young. Ethan will be one scary beast of a man! 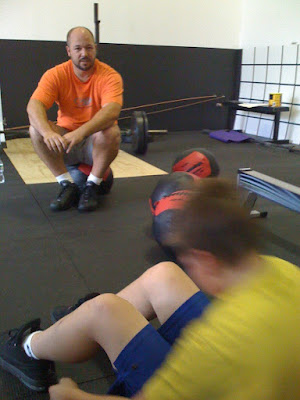 New To Crossfit? You’ll be figuring out exactly where you stand with a workout we call ‘Baseline’

Been here once or twice- ‘Fight Gone Bad’

Also thank you for everyone who gave everything they had to the Caleb WOD.

Jessie has been incredible- I have never felt this springy at 6am when it’s still dark. In all seriousness I couldn’t have been more pleased with how much you gave to today’s WOD! Monster in the making!

“Park in front of our bay and we’ll puke on your vehicle.” Way to send a message Jon!

Mike getting full range of motion on his burpees for “Ryan.” Apparently this was a particularly powerful burpee that sent a shock wave into the black part of our wall that opened a portal to another dimension…

Christian made it look easy!

Turns out two weeks of steady crossfitting was all she needed to conquer her fear and double her jump height pr.

Our hearts go out to Jeremy and Kristine Stecker of Eugene Crossfit who lost their beautiful baby boy, Caleb, this week. Our thoughts and prayers are with you.

We will run “Caleb” at CrossFit Cape Cod as a small way to pay our respects to Caleb and his family.

Caleb Elijah was born 8-8-08 with half of a heart. (The condition is known as ‘Hypoplastic Left Heart Syndrome’). Immediately out of the womb the specialists whisked him away to operate. In the surgery everything went as planned and they reminded us that the recovery was the hard part. Day after day they would remove the machines doing his normal body functions as we held our breath. Caleb did fantastic each time. After all the machines were removed Caleb either set a new record or tied an existing record for coming home the fastest after the surgery. To add to it, even after eating out of a feeding tube all that time, he breast feed like he had been doing it the whole time. The doctors and staff were happily confused, I guess that never happens.

Fast forward 50 days to yesterday. Sometime late morning, Caleb was doing great but suddenly seemed to have a little difficulty breathing. Being only a few minutes to the ER, we rushed him there and by the time we got there he wasn’t breathing at all. The doctors stabilized him and then it happened again. They stabilized him again. This happened a few times. They noticed that although his heart was pumping and he was breathing, his body wasn’t getting any oxygen. They found the shunt they had put in from the surgery was completely obstructed. The PH balance of his blood showed that he had not been getting enough oxygen for his vital organs during this time. The only thing we could do is unplug him and let him go. Caleb Elijah peacefully passed away around 6:00pm last night.

About a week before he was born, his dad suffered two severely broken bones in his left hand in a softball accident. They operated and repaired his hand. While Caleb was alive his father could only do Crossfit workouts that didn’t include his hands. In many cases he substituted running, box jumps, or lunges. The three eights are for his birthday, 8-8-08.

Caleb’s father’s small scar from the hand surgery was an inch longer than Caleb’s scar on his chest after his heart surgery. When Caleb passed away his scar was identical in every way to his fathers scar.

Maplewood, Missouri Firefighter, Ryan Hummert, 22, was killed by sniper fire July 21st 2008 when he stepped of his fire truck responding to a call. He is survived by his parents Andrew and Jackie Hummert.

Let me say that everyones enthusiasm for CrossFit has been amazing! You guys are really digging deep and making giant leaps and bounds in your fitness. CrossFit works-better than any programming out there. In order to continue to make the amazing progress and keep your intensity high-proper rest and nutrition will be essential. If you are so sore that you cant function properly- nevermind hit the WOD with everything you’ve got-go ahead take a rest day. Especially if you are still getting used to the programming. This will enable you to come back stronger and get a better more productive and enjoyable workout the next time.

Add the total pounds of all 3 lifts for your score.